Another porky – or should I say “falsehood” – by Jeremy Hunt

In his Telegraph article attacking Stephen Hawking’s 19 August speech on the NHS at the Royal Society of Medicine Jeremy Hunt made a series of statements that exhibited his trademark use of weasel words, distortions and omissions. But there was one outright lie that really bothered me as it exemplified the very thing he was being accused of by Hawking – shameless abuse of statistics. In the Telegraph article Hunt produced the following bar chart of the different parties’ manifesto promises on NHS spend by 2022-23.

I knew immediately there was something wrong with that graph because I had read the Nuffield Trust’s report on the different parties’ manifesto pledges on NHS funding and recalled that Labour had promised to increase funding by more than the Conservatives. I looked at the Nuffield report again and discovered that what Hunt had done was truly sneaky. He had used two different baselines from which to measure the different parties’   funding pledges, thus artificially deflating the Labour and Lib Dem NHS funding pledges by several £billion relative to the Conservatives.

To make a true comparison Hunt should have used the same baseline for all parties – either current or projected spending levels.  That’s what the Nuffield report did.

It analysed the different parties’  manifesto spending pledges and estimated the promised NHS funding increase of each party by 2022/23 compared with spending this year.

The graph below from the Nuffield Trust shows the true picture. It also shows that all three parties’ spending pledges will mean a reduction in NHS spend as a percentage of GDP and will fall well short of various reliable predictions of NHS funding requirements.

Conservatives spending proposals would bring total health spending in England to £131.7 billion by 2022/23, an increase of £8 billion over spending this year.

Labour’s spending commitments would bring total health spending in England to £135.3 billion in 2022/23; an increase of £11.6 billion over spending this year.

Jeremy Hunt’s bar chart should have looked like this: 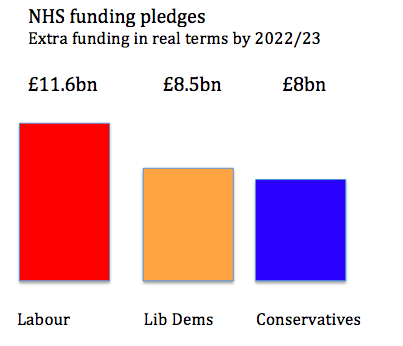 Hunt’s trick of using two different baselines tells the opposite of the truth. This isn’t “cherry picking”. It is a deliberately deceptive use of statistics. The real data was there, already analysed and easy to find. Hunt has a team of people working for him. He can’t pretend he didn’t know.

This entry was posted in Uncategorized. Bookmark the permalink.