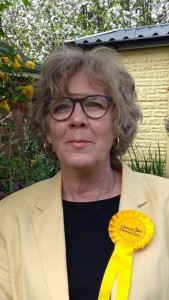 You may know me. You may even have voted for me. I am your newly elected Liberal Democrat Surrey County Councillor for Godalming North and I beat the Conservative candidate just a few weeks ago. If you voted for me, thank you – I will strive to represent you as strongly and passionately as I can.

Nationally, I want the Liberal Democrats to do as well as they possibly can in the coming election. I believe in our vision for a Stronger Economy and a Fairer Society. #IAgreeWithTim.

I won here partly due to an alliance locally. Labour and the Greens didn’t stand against me and we united in beating the Tories.

In the coming election, we have another alliance. Local Lib Dem, Labour and Green party members voted overwhelmingly to support Dr Louise Irvine as the Progressive Alliance candidate to take on (and defeat) Jeremy Hunt. Unfortunately, the national Labour and Lib Dem parties have rules that state we must have a candidate but, they can’t win!

We must put people above party, which is why I will vote for Dr Louise Irvine of the National Health Action Party. And it’s why I urge you to join other Lib Dem supporters (and Greens and Labour) to vote for her too. She is the best placed candidate to challenge Jeremy Hunt on the NHS and the other big issues that affect us all.

Together, we can defeat Jeremy Hunt.

A note from Dr Louise Irvine…

Even the bookies are saying that the Lib Dems have no chance to beat Jeremy Hunt, but with Lib Dem support I can.

A vote for the Lib Dems is a vote to keep Jeremy Hunt.

I know you don’t want that so please vote for me, Dr Louise Irvine, National Health Action Party.